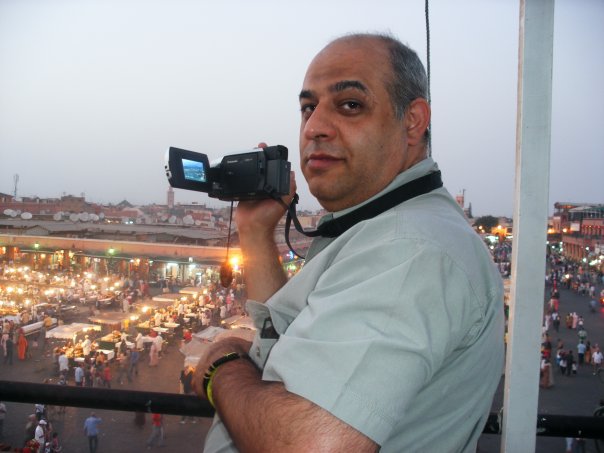 Ah: the Jemaa el Fna. You know what? When I first laid eyes on it by day I did that silly hand-flappy thing that girls do when they get over-emotional/excited. And, even more embarrassingly for the step children, my eyes filled with tears. It is the most awesome living film set on earth (although I have, admittedly, still got quite of lot of the earth left to see). So you can imagine my excitement when we visited it at night… Even the normally placid Mr. Shopkeeper was impressed (there he is in the picture: give him a little wave). For by night it is just the biggest street food fest: stall upon stall upon stall of grilled meats and fresh breads and freshly squeezed juices competing in a riot of colour and spectacle and sound and aroma. It was possibly out of this brief-but-wonderful visit that the (roasted and salted) seeds of Snackistan were planted. It was certainly where we got to try boulfaf. This lovely dish is mostly eaten during Eid-al –Adha, or the ‘Feast of Sacrifice’, one of the big Islamic festivals which celebrates both the end of the month of pilgrimage, or hajj, and the sacrifice that Abraham was prepared to make (ie that of his son) in the name of his love of Allah. Rich families across the Muslim world buy and slaughter sheep (just as Allah provided a sheep for Abraham to kill in place of his own son) to share with their relatives and the poor of the neighbourhood: in Morocco a number of dishes are traditionally made from the sheep, and this is perhaps the simplest and tastiest. It is hugely popular street and souk food. Ingredients (to serve 4): Firstly fire up the barbie. You can cook this under a regular grill – but pop your extractor fan on as the melting fat produces smoke. You can also ditch the skewers and bake the liver instead. ‘Peel’ the liver i.e. remove the outer membrane, and cut it into 3cm cubes. Mix the spices and seasoning together, and then shake half over the lamb cubes, turning them to attain even distribution. Stretch the caul fat out and then cut it into 6-7cm squares roughly commensurate with the number of cubes of liver that you have (left over liver should be given to the cat). Sprinkle the rest of the seasoning over the fat, and then place a lump of liver on top of each square. Pull the fat up around each cube: you will find that it sticks to itself (would that gifts were that easy to wrap). Thread 4-5 lumps of liver on to a skewer and repeat until all the meat has been used up (you’ll need around eight skewers, or you can just wash and recycle them a bit sharpish). Grill for around 5 minutes a side: the liver should be just a little pink in the middle. If you are baking your boulfaf, about twenty minutes at gas mark 5 (190˚C) should do the trick. Serve with loads of lemon wedges and warm flat bread. Moroccans reckon the best accompaniment for this is mint tea, and who are we to argue? *Not worked with caul fat before? It is just so very useful (albeit weird) as it stretches seemingly endlessly, and is more or less self-sealing, like a kind of edible cling-film. It is a great way of keeping loose meat ingredients together (sausages, minced meat), and is also handy for barbecue aficionados, as it seals and bastes delicate meat as it cooks. It is readily available from good independent butchers, both halal and otherwise.
Category: Recipes
Tags: boulfaf, caul fat, Jemaa el Fna, kebabs, liver, Marrakech